VLACHERNA MONASTERY
The monastery is located near Kyllini in a sensational landscape that strikes the visitor with its simplicity. It was built during the 12th century and the origins of its name derive from the famous Monastery of Vlacherna in Constantinople, to which it was dependent. However, time and disasters have destroyed important records of the monastery, a fact that provokes a dispute about the details of its establishment. The temple of the monastery is a blend of western as well as eastern architectural elements.

RIVER NEDA
River Neda is one of the few rivers of Greece that still offer an environment so virgin and untouched by human activity. Besides, it is –maybe- the only Greek river that has been given a female name, in honour of the nymph Neda, a deity of the waters. Neda, according to the Greek Mythology, had bathed the infant Zeus in the river Gortynios (Lousios), together with the nymphs Theisoa and Agno. The river crosses a narrow canyon of unimaginable beauty, creating an almost mystical landscape, with waterfalls and natural pools spread between wooded hill slopes, under the shade of huge plane-trees, oaks, fig-trees and thick bushy vegetation.

THE TEMPLE OF APOLLO EPICURUS
Almost hidden in a wild and imposing landscape, on a narrow terrace of Mt. Kotilion, at 3710 ft., 14 km southwest of Andritsena, is the magnificent temple of Apollo Epicurus. At this site called Bassae during ancient times, in the 7th B.C. century, the citizens of the small state of Figaleia (ArcadiaPeloponnese) had established the temple of Apollo, whom they worshiped with the title “Epicurus” – helper and deliverer in sickness or war. The title was given during the war with the Spartans, around 650 B.C. The temple is considered one of the best preserved classic monuments all over Greece, together with the temple of Ifestos in the ancient Agora of Athens, and easily takes the first place in the Peloponnese, for the beauty and harmony of its structure.

RIVER LOUSIOS
The name Lousios derives from the Greek verb “λούζω”, because according to the myth, the nymphs chose this river to bathe the new born Zeus in its crystal clear waters. It is a rather short river (26 km) that springs from Karkalou plateau, north from Dimitsana, meets with river Alfios at the west of Karytena and gathers impressive quantities of water during its course, creating a gorgeous canyon, one of the prettiest in Peloponnese.

DON'T MISS
A private wine testing in renowned Greek vineyards that produce some of the best wines in Europe. Ask the concierge to make the necessary arrangements. 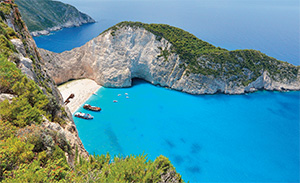 Explore the neighboring Greek islands with your yacht.