Lake Plastiras
The landscape is fascinating while the lake is embraced by high green mountains and the region is considered a “paradise” for nature lovers. It provides activities such as mountaineering, fishing, all types of mountain sports and walks in the forest. The lake is found 25 kilometres, west from Karditsa, at an altitude of 800 meters.

Mount Olympus
Mount Olympus, the highest Greek mountain, was considered the residence of the twelve Gods in ancient Greece. It is located in the border of Pieria and Thessaly and in 1938was declared the first National Park in Greece. Olympus is internationally known as for its important ecological characteristics and incomparable natural beauty as well as for its strong relationship with ancient Greek mythology. The importance of the National Park has been recognized not only in Greece and Europe but all over the world. In 1981 UNESCO declared Olympus a “Biosphere Reserve”. The European Community has included Olympus in the list of “The Most Important Bird areas of the European Community”. 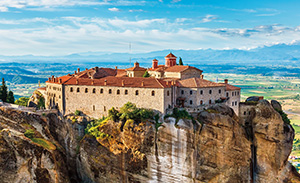 Within an hour’s drive from Larissa are many beautiful places.