THE TEMPLE OF POSEIDON

THE TEMPLE OF POSEIDON

The Temple of Poseidon is situated directly opposite the Resort and is in plain view from several kilometres. Built to honour the ancient sea god, the temple dates back to 444-440 BC and was constructed from local white marble in Doric style. It was the symbol of Athenian power and an important religious and maritime icon of ancient times – marking both the last sign of civilisation and the first sign of home for generations of Athenian seafarers.

According to legend, Cape Sounio is the spot where Aegeus, king of Athens, leapt to his death off the cliff, thus giving his name to the Aegean Sea.  The English poet, Lord Byron has carved his name on one of the front pillars of the temple.
Visit the Temple via the road from the hotel or by anchoring in the small sheltered bay at the foot of the temple's cliffs and then hiking up to the monument. The views of sunset seen through the temple’s ruins are regarded as one of the most celebrated sights in all of Greece. 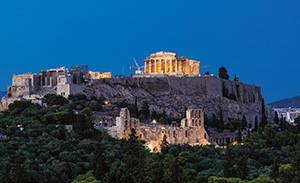 The crown jewel of Athens and all of Greece with its unique monuments rises in the heart of Athens, the ultimate altar-of intellectual achievement. 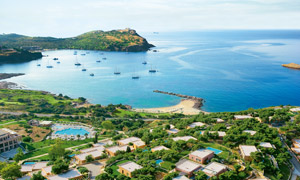 Boutique Resort
The myth of the Aegean Sea surrounds the Resort which in itself sits on an archaeological site with two private beaches and its bungalows and villas hidden in the pine hills.
VISIT HOTEL 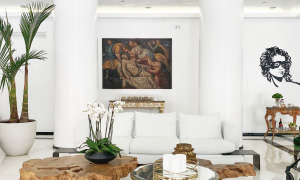 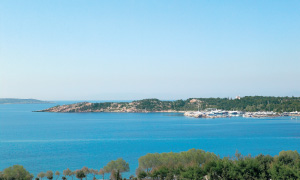 Suite Dreams... on the Attica Riviera with great sea and sunset views, an exclusive address for those who require the finest things in life.
VISIT HOTEL