The city was created because of the many nations that used Rhodes as a geographical and cosmopolitan crossroad.  It is believed that the Colossus of Rhodes, one of the Seven Wonders of the Ancient World, stood at the entrance to the port of Mantraki. The Colossus was destroyed by an earthquake in the Hellenistic period. Towers, castles and windmills offer a wonderful background.  Parks, squares, shops, restaurants offering traditional Greek dishes, café and bars, and the famous casino of Rhodes are there for everyone to enjoy!

The Medieval City - Old Town
A UNESCO Heritage Site. According to UNESCO it is “one of the most beautiful urban ensembles of the Gothic period”.  Surrounded by a 4 km wall, it is the most well preserved city of the 14th century. Walk on the narrow pavements, through the arcades and enjoy the great architectonic masterpiece of the Byzantine, gothic and ottoman influence in architecture and its decorative elements. Using one of the 9 grandiose gothic gates is an entrance to the Byzantine settlement with innumerable churches. The Knights of the order of St. John added carefully the gothic touch seen, in the lodging of the 12 nations in the today’s Knight’s street leading to the unique Grand Master’s Palace. The crown of this precious diadem are the ottoman’s masterpieces such as the mosque of Suleiman, the complex of the Turkish baths, the tower of the big clock and the lots of minarets.

The Palace of the Knights
Standing for 800 years, is the place that hosted the Magisters of the Knights but also the symbol of power and majesty through the centuries. Decorated with 150 shields of the Knights, majestic towers, impressive castle doors, great chambers, a real state of art. 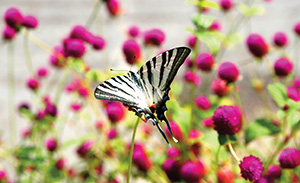 VALLEY OF THE BUTTERFLIES

Part of Natura 2000 networking programme due to its importance as a rare biotope.