The Therme of Kallithea
The healing source of Kallithea which provided with water this structure of the Italian period of the beginning of the 20th century is dried out. However the incomparable skill of the Italian architecture combining with the enchanting beach, the rocky surrounding and the blue water make the whole place worth visiting it.

The Hill of Filerimos
With the panoramic view of the western side of Rhodes, here you will find a religious complex of ancient temples as well as catholic and orthodox churches next to the path with the signs of the religious order of the heretic self-whipped monks.

Profitis Ilias Mountain
The two hotels ‘Elafos’ and ‘Elafina’ built in the typical tyrolian architecture style by the Italians are dominating over the green surrounding, overlooking to the blue sea.

The beach in Tsambika, Haraki and Kolymbia
Some of the most favourite beaches in Rhodes, with fine sand or shingles, satisfying all kinds of taste. 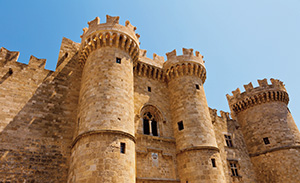 Rhodes historical places should not be missed.