Kos has some of the most picturesque villages in the Dodecanese. The variety of churches, mosques, ancient, and medieval structures show the importance of the island and the variety of inhabitants over the ages.

Zia
The village of Zia lies on Mount Dikaios and has many natural streams.  Endemic birds are heard along the small pathways and brilliant white houses.

Mastihari
Mastihari is a small seaside community with a harbour from which ferries run frequently to the neighbouring island of Kalymnos.

Kardamena
Kardamena is 25 km from Kos town. In this seaside village agriculture and fishing are the main occupations. To the north there is a castle on the hillside, which was inhabited by the Christians.

Kefalos
Kefalos lies 45 km from Kos town. It is the most westerly village. Built on an embankment, it is one km off the coast from Kamari. It is one of the most beautiful beaches of the island.

Pyli
Pyli, which is 15.6 kilometres away Kos town, has about 1.816 inhabitants. It is worth stopping at the junction of the main road, which leads to the villages with that of the road to Pyli, to admire the lake where the ducks continually disport themselves. Pyli also includes the hamlets of Amaniou and Konidario. The inhabitants are engaged in farming. They have a very rich yield thanks to the abundant water of two springs, that of Harmilos, king of the island in antiquity. An early Christian basilica, founded by Saint Christodoulos, as well as the historical castle of the village is to be found in Old Pyli. Also Luciano Lauvrenzi discovered in 1928 at Amaniou the sanctuary of two Eleusinian deities.

Antimahia
Antimahia (25 km. from town) is built on a plateau near the island's airport and Mastihari. Just 3 kilometres from here is a Venetian castle and two well-preserved Byzantine churches. 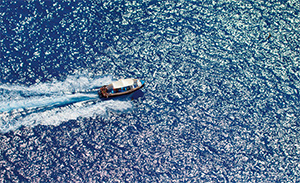 A day-cruise to the neighboring Greek islands is 'a must'.