Palace of Knossos
5km south of Heraklion. It is impossible to visit Crete without touring the Palace of Knossos, the pre-eminent Minoan settlement and one of the most famous archaeological sites in the world. Discovered in the late 1870s by Minos Kalokerinos, it was excavated by Sir Arthur Evans for 30 years and is linked through Cretan myths with King Minos, son of Zeus and Europa. Minos may have ruled in legend, but it now seems more likely ‘Minos’ was not a single king but the title given to the rulers of Knossos. The palace covers an area of 20,000 sq m and is so large and labyrinthine that scholars believe it was the inspiration for the myth of Theseus and the Minotaur.

Phaistos (Festos)
62 km south of Heraklio. The second largest city of Minoan Crete is built on a hill 100 m above sea level, in the fertile valley of Messara. Since 1900, continuous archaeological excavations from the Italian Archaeological School, have brought to light the magnificent Minoan Palace with its royal courts, great staircases, theatre, storerooms and the famous Phaistos disk. SEE YOU IN RETHYMNO

Jasmine and olive trees amongst barren rocks, churches & monasteries; ancient sea turtles come back again and again on the longest beach of Crete. All in Lifestyle Resort
A relaxed-paced heaven for all inclusive family bonding holidays in Crete.
VISIT HOTEL 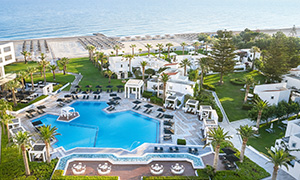 Luxury Beach Resort
A true Cretan Palace! So full of memories, so full of smiles. Indulge in the ultimate vacation at a luxurious beachfront paradise.
VISIT HOTEL All in Lifestyle Resort
A magical seaside Palace revels in a beautiful setting overlooking a tiny island. Ideal for all-inclusive holidays in the eastern Crete.
VISIT HOTEL